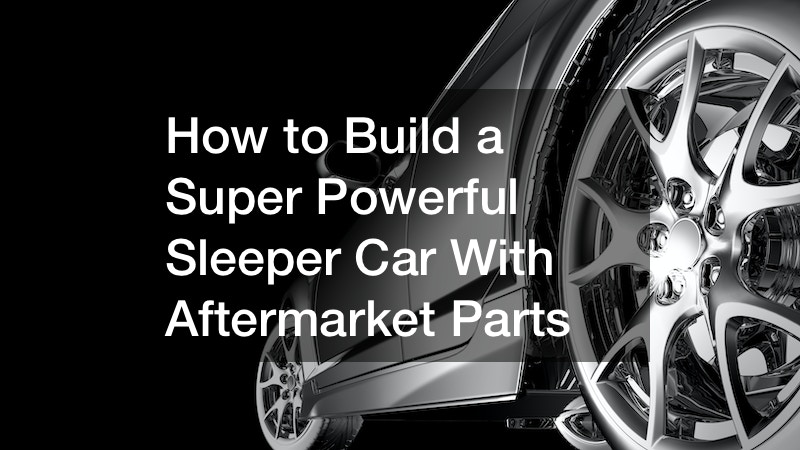 Sleeper cars have been around since the 1950s. One of the earliest examples was the iconic Chrysler 300, which packed a 300-horsepower Firepower Hemi V8 into an unassuming package. There’s something lovely about owning a secret supercar destroyer dressed up as a factory base spec model and the Chrysler C-300 was the first production passenger car to pack in so much heft. Today, there are various ways to tinker with your car and make it into an all-go and no-show wolf in sheep’s clothing. Here’s a list of 10 things you can do to build your very own super powerful sleeper car:

Right off the bat, you may be considering a new engine. A V8 is a great option due to the excellent way it balances power, torque, and weight. Cross-plane V8s are, in particular, a great middle ground in terms of being a well-balanced engine, ease of packaging, and RPM potential. They may not be excellent at any one measure, but can be fitted into anything without costing an arm and a leg. A new V8 could cost you about $7,000, whereas a used one could go for as low as $3,000.

A new V6 could cost you about $5,500. And there is the argument that there isn’t a dramatic increase in moving from a V6 to a V8. However, V8s have a much higher power ceiling, e.g., the 6.2L High-Output HEMI V8 with 797 horsepower. A V6 can’t do that. You also get better acceleration and speed with the V8 though the V6 has better handling, is cheaper, and is more fuel efficient. Either way, there are many other engines you can tinker with, with different considerations to make.

This is an excellent way to upgrade your vehicle into a super powerful sleeper car. Normally, the engine sucks in air via the intake stroke of the piston. On the other hand, forced induction, either through a turbocharger or supercharger, pushes more air into the engine. More air means more fuel can be added to the same naturally aspirated engine. This generates more mechanical power and a more efficient combustion process.

According to J.D. Power, a turbocharger can boost an engine’s power output by 25% to 40%. They work by passing exhaust gases through a turbine that creates a vacuum to compress the gases before pushing them through the engine’s intake manifold. However, this process is not immediate and produces the famous poor throttle response known as ‘turbo lag.’

If you’ve installed a turbo/supercharger, don’t go to the auto painting service just yet to call it a day. Your super powerful sleeper car may need an intercooler upgrade to reduce the temperature of compressed air from the charger. Part of engine management involves trying to keep it cool, which improves its longevity and efficiency. Unfortunately, your turbo/supercharger compresses air, thus heating it.

This is where the intercooler comes in. Intercoolers influence horsepower output by improving the engine’s combustion process. The laws of thermodynamics state that the larger the temperature difference, the more the energy created through combustion. Intercoolers cool the intake air creating a larger difference in temperature between the air and combustion temperatures within the cylinder. According to repairpal, fitting a new intercooler would cost you between $901 and $955.

From the shop, cars are conservatively tuned for efficiency rather than speed. This means that there’s unlocked potential hidden within your car. Tuning a stock car can add 20 horsepower. Tuning your super powerful sleeper car with its high-performance parts can net you even bigger gains. Especially if you’ve tacked on something like a turbo. An ECU tune can improve your top-end horsepower, low-end torque, and overall efficiency.

An ECU tune can remove the rev limiter, allowing you to rev higher than the dashboard limit. However, this will not be good for the durability of your engine since revving too hard can affect the pistons, engine, and transmission. Much more palatable is removing the top speed limiter, updating the engine torque map, improving throttle response, and adjusting the car’s air/fuel ratio.

Adjusting the air/fuel ratio to allow more fuel in the combustion chamber can create a more powerful and optimal combustion process. Updating the torque map can increase your torque at low RPMs, meaning you can accelerate faster out of every corner or up a hill at low RPMs. Tinkering with the torque map can also make your car more responsive to gas pedal presses. For the best results, consult your tuner on the best settings. Take your car to someone who absolutely knows what they are doing. If you go too far with some of these car tune-ups, you may wreck your car or break the law. Depending on how you configure your super powerful sleeper car, tuning can cost you between $600 and $1,000.

You can’t possibly leave tires out. They affect everything from handling, acceleration, braking, and fuel economy. Whether you wish your super powerful sleeper car to have powerful drag strip acceleration or nimble cornering – you need some good grip on the road. It won’t matter if you manage to add on horsepower, only for your tires to spin uselessly each time you put your foot down. In your quest for performance benefits, stay away from all-season tires. Instead, look for summer or ‘three season’ tires. However, if you still need fuel efficiency, look for tires that do not compromise as much. Look into lesser-known brands as well, especially from South Korea.

Speaking of grip, a rear diffuser is a great simple addition for doing just that. Even better, a rear diffuser keeps your super powerful sleeper car a secret, unlike adding something like a wing. The rear diffuser helps generate downforce at the back, keeping your rear wheels to the ground as you speed off. Best of all, it’s an inexpensive auto body work modification.

Speaking of secrecy, some of the best sleeper cars are pickup trucks. For those looking for a different look with the added benefit of better aerodynamics and more fuel efficiency, a snugtop is a worthy addition. Consumers report increases in fuel economy of as much as 1.5 to 2 mpg after adding a snugtop.

That means that open differentials direct more energy to the wheel spinning less, which results in the tire skidding or skipping. This is fine at low speeds but not when speeding. In a corner, more downforce is applied to the outer wheels. This means that the inner wheels become the path of least resistance, so more power will be sent to them, not the outer wheels with more traction. An LSD is more efficient at distributing power. In addition, you may notice benefits such as less tire wear and axle shaft wear. Upgrading to a limited-slip differential will set you back about $600 to $1200, which isn’t too bad considering the benefits. A rear bumper collision repair costs about the same at $300 to $1,500.

According to autochimps, adding a performance camshaft can gain you around 10% more power depending on your engine and drivetrain. This means that an output of 150bhp could rise to about 165bhp. Camshafts open the intake and exhaust valves to allow air (or an air/fuel mix) to come in and exhaust gases to come out. The amount, duration, and point at which the camshafts open the valves affect how much power and torque the engine produces. Because the camshafts can modify how much air or fuel comes into the engine, they are an effective mod for a super powerful sleeper car.

From the factory, camshafts open just the right amount so your vehicle can be fuel efficient and last longer. Performance camshafts must be specific to your vehicle and can cost about $1,000 to $2,500. If done alongside other drivetrain transmissions, e.g., new intake, exhaust manifolds, high-quality fuel injectors, power transmission, ECU tune-up – you could be looking at 20% to 25% horsepower gains. However, be careful with the additions you make to your car; otherwise, you’ll be looking at expensive car repair costs.

Sway bars are great for handling. Your super powerful sleeper car can benefit from them as they transfer weight to different corners of the car as you drive. As you can imagine, this provides better feedback to the driver and improves handling as well as drivability. The name might not be the most appropriate because they actually prevent rolling as you corner. As such, they are often called stabilizer bars, anti-roll bars, or anti-sway. With better handling, your car will drive like a Porsche. Hence you won’t need a Porsche repair any time soon.

Consider having auto welders install some straight pipes to your sleeper to help the engine breathe better. Straight pipes drop the resonator, muffler, and catalytic converter in favor of a straighter pipe that goes from the engine to the exhaust tip. As such, there are no obstructions to the release of gases from the engine, which results in more noise and some extra horsepower. As the drunk driving law protects other motorists and pedestrians, the exhaust system protects the environment and people from harmful exhaust gases.

However, the components of exhaust also hamper performance. But be careful as you may find that you prefer the relative silence of a full exhaust. A straight pipe can be alarmingly loud though it is a cheap modification that would cost you about $150. The other thing about a straight pipe is that it’s illegal. An auto accident lawyer will tell you that it is legal in only a few states, so you may face the law at one point with such an obvious modification.

One workaround is to have an exhaust cut-out that opens at the push of a button, perhaps at a red light when you are right next to some unsuspecting Porsche. They can be set to open manually or at a certain RPM, giving your super powerful sleeper car the boost it needs.

Sleeper cars are beloved because who doesn’t want to see the underdog pull a shocker? Even so, with all those modifications, a driver needs to be careful, or they’ll soon be calling the accident injury attorneys. If you aren’t one for mods, you have the option of buying a vehicle like the unassuming Volkswagen Jetta GLI. If you need assistance building your sleeper car, call us today.